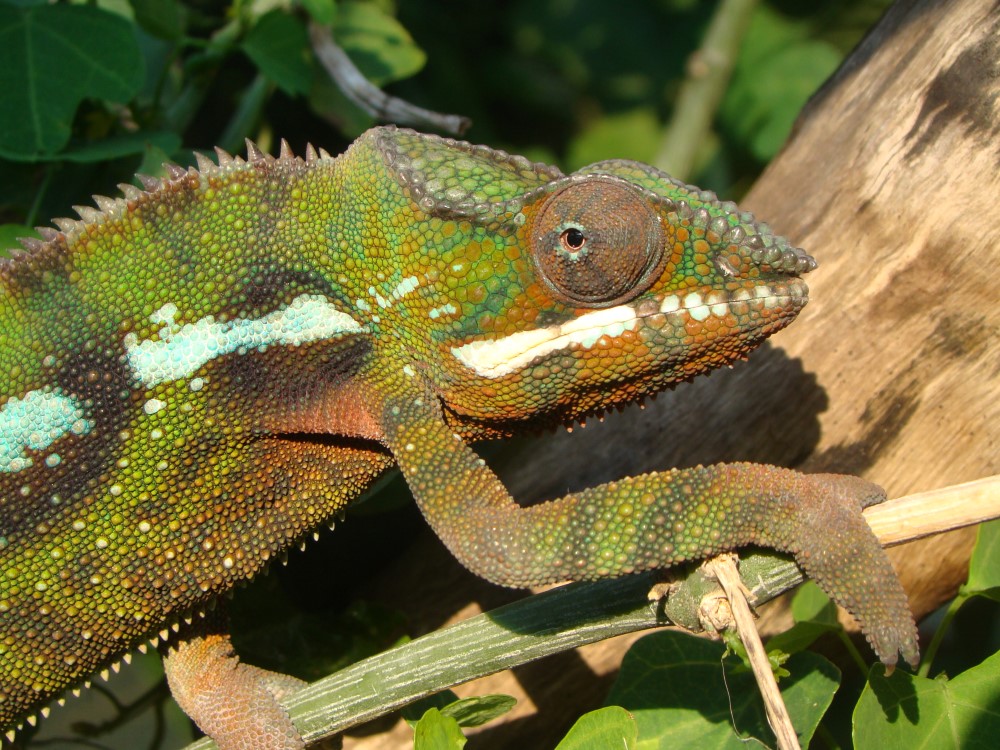 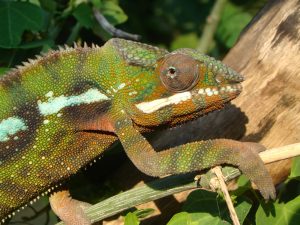 Chameleons or chamaeleons (family Chamaeleonidae) are a distinctive and highly specialized clade of Old World lizards with 202 species described as of June 2015.[1] These species come in a range of colors, and many species have the ability to change color.

Chameleons are distinguished by their zygodactylous feet; their very extensive, not highly modified, their swaying gait;[2] and crests or horns on their brow and snout. Most species, the larger ones in particular, also have a prehensile tail. Chameleons’ eyes are independently mobile, but in aiming at a prey item, they focus forward in coordination, affording the animal stereoscopic vision.

Chameleons are adapted for climbing and visual hunting. They live in warm habitats that range from rain forest to desert conditions, with various species occurring in Africa, Madagascar, southern Europe, and across southern Asia as far as Sri Lanka. They also have been introduced to Hawaii, California, and Florida, and often are kept as household pets.

Etymology
Mughal era painting of a chameleon by Ustad Mansur.

In 2015, however, Glaw reworked the subfamilial division by placing only the genera Brookesia and Palleon within the Brookesiinae subfamily, with all other genera being placed in Chamaeleoninae.[1]

Some chameleon species are able to change their skin colouration. Different chameleon species are able to vary their colouration and pattern through combinations of pink, blue, red, orange, green, black, brown, light blue, yellow, turquoise, and purple.[16] Chameleon skin has a superficial layer which contains pigments, and under the layer are cells with guanine crystals. Chameleons change colour by changing the space between the guanine crystals, which changes the wavelength of light reflected off the crystals which changes the colour of the skin.

Colour change in chameleons has functions in camouflage, but most commonly in social signaling and in reactions to temperature and other conditions. The relative importance of these functions varies with the circumstances, as well as the species. Colour change signals a chameleon’s physiological condition and intentions to other chameleons.[17][18] Because chameleons are ectothermic, another reason why they change color is to regulate their body temperatures, either to a darker color to absorb light and heat to raise their temperature, or to a lighter color to reflect light and heat, thereby either stabilizing or lowering their body temperature.[19] Chameleons tend to show brighter colours when displaying aggression to other chameleons,[20] and darker colours when they submit or “give up”.[21] Some species, particularly those of Madagascar and some African genera in rainforest habitats, have blue fluorescence in their skull tubercles, deriving from bones and possibly serving a signaling role.[22]

Some species, such as Smith’s dwarf chameleon, adjust their colours for camouflage in accordance with the vision of the specific predator species (bird or snake) by which they are being threatened.[23]

The desert-dwelling Namaqua chameleon also uses colour change as an aid to thermoregulation, becoming black in the cooler morning to absorb heat more efficiently, then a lighter grey colour to reflect light during the heat of the day. It may show both colors at the same time, neatly separated left from right by the spine.[citation needed]
Mechanism of colour change

For a long time it was thought that chameleons change colour by dispersion of pigment-containing organelles within their skin. However, research conducted in 2014 on panther chameleons has shown that pigment movement only represents part of the mechanism.[24]

Chameleons have two superimposed layers within their skin that control their colour and thermoregulation. The top layer contains a lattice of guanine nanocrystals, and by exciting this lattice the spacing between the nanocrystals can be manipulated, which in turn affects which wavelengths of light are reflected and which are absorbed. Exciting the lattice increases the distance between the nanocrystals, and the skin reflects longer wavelengths of light. Thus, in a relaxed state the crystals reflect blue and green, but in an excited state the longer wavelengths such as yellow, orange, green, and red are reflected.[25]

The skin of a chameleon also contains some yellow pigments, which combined with the blue reflected by a relaxed crystal lattice results in the characteristic green colour which is common of many chameleons in their relaxed state. Chameleon colour palettes have evolved through evolution and environment. Chameleons living in the forest have a more defined and colourful palette compared to those living in the desert or savanna, which have more of a basic, brown and charred palette.[26]
Evolution
Male of long-nosed chameleon (Calumma gallus) at Vohimana reserve, Madagascar.

The oldest described chameleon is Anqingosaurus brevicephalus from the Middle Paleocene (about 58.7–61.7 mya) of China.[27]

The chameleons are probably far older than that, perhaps sharing a common ancestor with iguanids and agamids more than 100 mya (agamids being more closely related). Since fossils have been found in Africa, Europe and Asia, chameleons were certainly once more widespread than they are today.

Although nearly half of all chameleon species today live in Madagascar, this offers no basis for speculation that chameleons might originate from there.[28] In fact, it has recently been shown that chameleons most likely originated in mainland Africa.[14] It appears there were two distinct oceanic migrations from the mainland to Madagascar. The diverse speciation of chameleons has been theorized to have directly reflected the increase in open habitats (savannah, grassland, and heathland) that accompanied the Oligocene period. Monophyly of the family is supported by several studies.[29]

Daza et al. (2016) described a small (10,6 mm in snout-vent length), probably neonatal lizard preserved in the Cretaceous (Albian-Cenomanian boundary) amber from Myanmar. The authors noted that the lizard has “short and wide skull, large orbits, elongated and robust lingual process, frontal with parallel margins, incipient prefrontal boss, reduced vomers, absent retroarticular process, low presacral vertebral count (between 15 and 17) and extremely short, curled tail”; the authors considered these traits to be indicative of the lizard’s affiliation with Chamaeleonidae. The phylogenetic analysis conducted by the authors indicated that the lizard was a stem-chamaeleonid.[30] However, Matsumoto & Evans (2018) reinterpreted this specimen as an albanerpetontid amphibian.[31]

While the exact evolutionary history of color change in chameleons is still unknown, there is one aspect of the evolutionary history of chameleon color change that has already been conclusively studied: the effects of signal efficacy. Signal efficacy, or how well the signal can be seen against its background, has been shown to correlate directly to spectral qualities of chameleon displays.[32] Dwarf chameleons, the chameleon of study, occupy a wide variety of habitats from forests to grasslands to shrubbery. It was demonstrated that chameleons in brighter areas tended to present brighter signals, but chameleons in darker areas tended to present relatively more contrasting signals to their backgrounds. This finding suggests that signal efficacy (and thus habitat) has affected the evolution of chameleon signaling. Stuart-Fox et al. note that it makes sense that selection for crypsis is not seen to be as important as selection for signal efficacy, because the signals are only shown briefly; chameleons are most always in muted, cryptic colors.[32]
Description
Malagasy giant chameleon, Ambalavao, Madagascar
Cape dwarf chameleon in the act of defecation: the typical action by which it avoids fouling its own branch incidentally displays the difference between the arrangement of its fore and hind toes.
Nearly all species of chameleon have prehensile tails, but they most often grip with the tail when they cannot use all four feet at once, such as when passing from one twig to another.

Chameleons vary greatly in size and body structure, with maximum total lengths varying from 15 mm (0.59 in) in male Brookesia micra (one of the world’s smallest reptiles) to 68.5 cm (27.0 in) in the male Furcifer oustaleti.[33] Many have head or facial ornamentation, such as nasal protrusions, or horn-like projections in the case of Trioceros jacksonii, or large crests on top of their heads, like Chamaeleo calyptratus. Many species are sexually dimorphic, and males are typically much more ornamented than the female chameleons.